The Emergency Mission is the second variation on the Emergency, the survival instrument synonymous with safety for pilots around the world. Thanks to its design which is more similar to that of a traditional chronograph, the Emergency Mission affirms its character as a more civilian version than the original. But beneath this tamer appearance, the Mission remains a formidably efficient instrument and the performances of its transmitter are equivalent to those of a distress beacons carried aboard aircraft. By way of comparison, the average range of its signal - on flat terrain or at sea - reaches 90 nautical miles for a search plane flying at 20,000 feet. In optimal conditions, it can easily reach more than 200 nautical miles, meaning 360 kilometers!

NOTE: Battery Changes on the Breitling Emergency Watches should be performed by authorized AD as the battery change is quite complicated. 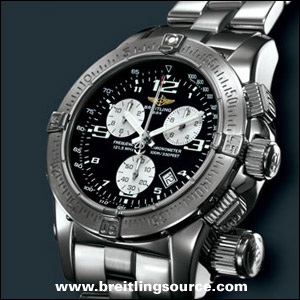