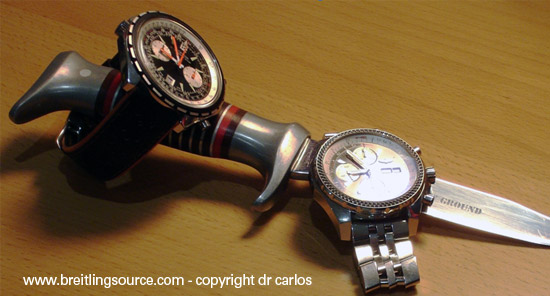 In the Summer of Love, Breitling launched a revolutionary case design – commonly known as the ‘Big Case Navitimer’. Originally housing the manual winding Venus 178, the 1967 release of the 816 was soon eclipsed by the advent of the automatic chronograph in the more turbulent year of 1969, still arguably the greatest feat in practical mechanical watchmaking. Accordingly, this case shape is more often associated with the automatic 1806 and related models housing the Buren Calibre 11/12 which were made from 1969 until Breitling’s bankruptcy in 1978.

More Black Sabbath than the Beatles, the Breitling 1806, along with offerings from Heuer featuring the same movement such as the Autavia, captures the distilled design elements of the early seventies as well as any high end European design from the automotive and fashion realms from the era. The first in a series of Chrono Battles, this article compares a NOS reincarnation of the 1806 in the form of an AVIATION 6801 to a modern classic, the Breitling Bentley GT. So, how does a Buren 12 equipped piece using old Breitling parts and new parts machined from the old tooling purchased by Albert Wajs following the Breitling bankruptcy compare to a modern Breitling? Pretty well in fact... 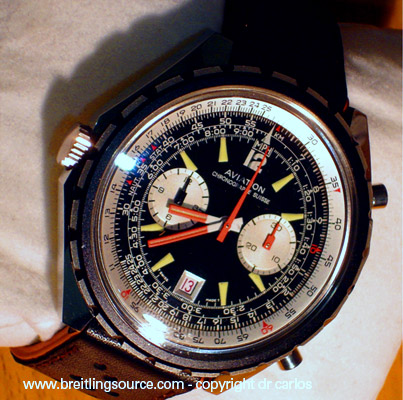 Case: Flat and spread out like a baby mechanical manta ray on your wrist. Nicely cut and polished. Overall extraordinary condition for something which probably dates from 1977.

Dial: Crisp and complex. Mat black with silver guilloche sub-dials topped off with a sublimely seventies orange/green combo for hands and index markers.

Movement: NOS Buren Calibre 12. Some time setting issues, but running sweet at about +2 seconds per day. 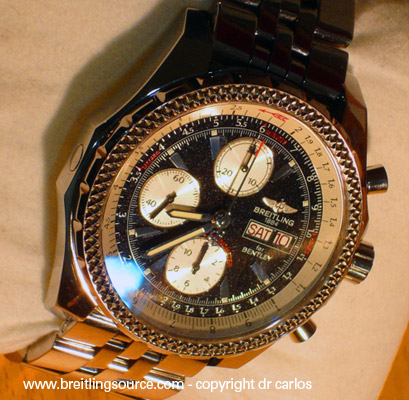 Dial: The contrasting sub-dials are the nicest of any modern chronograph.

Movement: The tried and tested ETA ebauche job. The chrono push buttons have remained stiff over two years, but it always keeps well with COSC.

Bracelet: Very flashy. Sometimes a bit too much bling really, but more often a glinting celebration of stainless steel.

This section was initially titled "Comparison", but that doesn’t set the tone I’m looking for. The 6081 is a vintage tool watch. The GT is a modern luxury watch. It just ain’t right pitting an aging hippy bought out of a deep cryogenic freeze against a modern metal beast like the GT. It’s more about appreciating the stylised octagonal case shape and geared slide-rule bezel as design traits passed on from the Breitling 1806 to the bezel equipped Bentlies in an evolutionary march across four decades of watchmaking. The contrasting silver sub-dials on a black GT make this design heritage rather pronounced. 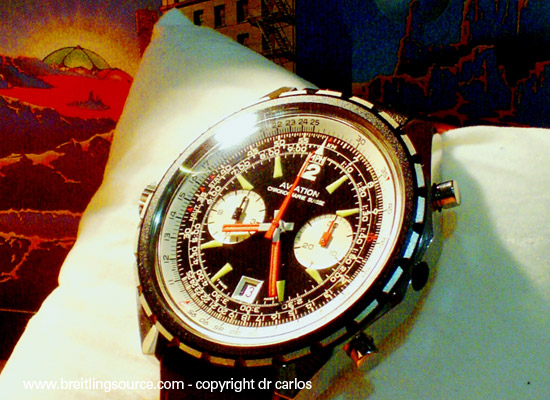 The 6801 could be mistaken for a set piece from a 70s sci-fi film. Wearing this near-pristine artefact makes one suspect it wasn’t just the pilots up the front of the Concord, but rock-stars partying out the back, who appreciated a bit of gear like this back in that curious decade.

For me, the coolest watch design is a big complicated black dialled chronograph with silver sub-dials and a geared silver bezel. I can appreciate a silver dialled chronograph with black sub-dials too – but I admit it’s a narrow field. I suppose to distil the design I’m looking for further is to describe it as a bigger Navitimer with "something" extra. For the Aviation 6081, that "something" is the retro look, and the fact that it is a genuine article from the seventies. For the GT, it’s a gorgeous case and dial along with the day display, which I find very reassuring. Both these watches exemplify the breed of technical chronographs, in different ways. 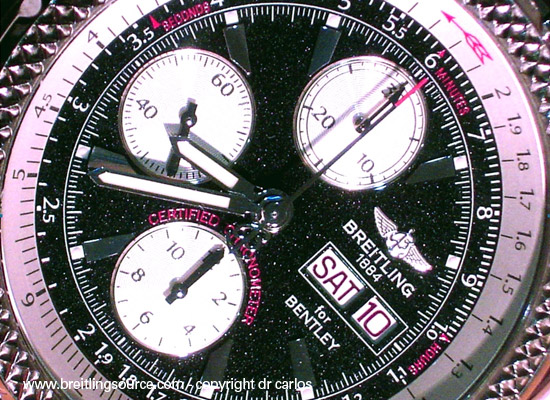 Into the cosmos. The Diamond Black dial of the GT invites the wearer into a journey of both time and space. Whilst more dry martini in an uptown bar with some high-class tail than the golden Acapulco vibe of the 6801, it’s clear the GT stands for Good Times…

Unlike the GT, the 6801 can’t really pull off being a dress watch. Given the relatively delicate construction of its geared bezel and very limited water resistance, like all Navi type pieces, it’s not rugged enough to be considered a true sports watch either. This of course begs the question of "well, what is it then?". Most people quickly, and I suppose rightly, would promptly chime in that "you’ve already said it’s a tool watch" or "it’s a pilot’s watch…stupid". But not to me it isn’t, really.

The exact function of the circular slide rule of the 6801 will forever remain a mystery to me. I suspect that just like today’s buyers of calculating bezel equipped Breitlings, even back in the seventies, many people who bought these things did so because they look cool. And true though it may be that I too was swayed to the GT by the variable tachymetre, it’s this coolness factor which the 6081 has more of than the GT. There is no escaping the fact that the giant Breitling 816 was a much more over the top case design in 1967 than the GT forty years hence.

Put another way, and given the GT’s nod to the automotive sector, starting the day with the 6801 is like strapping a 73’ Lamborghini Miura that’s been garaged in Milan for 35 years to you’re wrist. For me, the metaphor is complete - the Breitling 1806, and perhaps more so the AVIATION 6081, with it’s over-the-top orange hands, really is like a seventies super car.

The domed crystal, orange hands and, Jesus, the whole reality of this artefact, is a joy to take on adventures. In this respect, the very limited water resistance of the 6081 is an issue. In other words, if you fell off a yacht in a sunset haze, you wouldn’t freak out, but you’d get it dry ASAP. It’s not a watch one would choose to swim in. Nor, frankly, is the GT. But, one could if one was so inclined – the GT is rated to 100m.

Of course, the more rugged nature of the GT extends to more than water resistance, and to the movement itself. The modern incarnation of the ETA 7750 (the first generation of design of the 7750 actually goes as far back as 1974 and was the first totally computerised mechanical chronograph design), worked by Breitling, is both more rugged and more convenient to repair than the Buren Calibre 12 Debois Depraz movement of the 6081.

I don’t think there can be much rational argument against the Breitling 1806 in terms of its gorgeous late sixties/early seventies styling and it’s credibility as a truly revolutionary design for it’s time – but let’s be honest, it’s always been known as a watch which is a tad mechanically touchy. The Buren Calibre 12 movement with the Dubois Depraz chronograph module simply cannot be expected to be as rugged as a modern 7750 based movement. Out of the box, the 6081 has always had an excessively tight time setting mechanism, with the feeling of a slipping clutch if forced. Part of the stem and winding train needs attention, but the 6081 is simply keeping time too well to warrant a service just because of this issue. 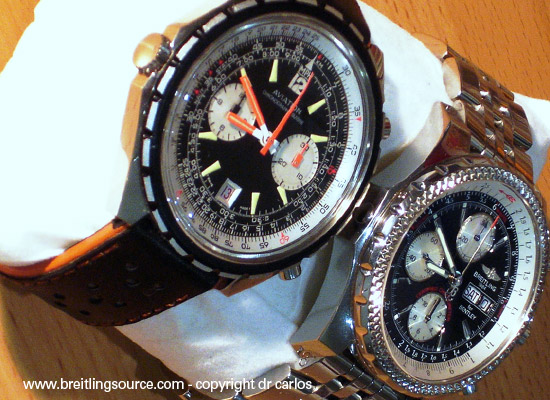 Both pieces feature similar silvery white geared bezel rings. However, in comparison to the 6801, whose pinion gear mechanism (which is also a common feature) may need an oil, the more deeply scooped bezel on the GT features a silky smooth action – like a mouses ear.

So, it’s true, the Buren Calibre 12 is a little finicky - just like the world’s first super cars, there is always the possibility pieces so equipped won’t make it through the side streets to the Autostrada. But the Breitling 1806 just has a look that is hard to resist. And just like the world’s first super cars, these massive chronographs must have blown people’s minds when they first came to market.

The anodised aluminium bezel of the 6801 is firm, but a tad scratchy compared to the chunky stainless bezel of the GT. As anyone who’s handled a well worn Breitling 1806 can attest, these bezels become rather dodgy after years of use. Finally, the sapphire crystal of the GT obviously won’t scratch unless one really tries, whereas the synthetic job on the 6801 will scratch no matter how much one tries to avoid it.

So, ironically, the more fancy lookin’ of the two chronographs is also the more robust. But hey, you’d expect that over the course of four decades of watch development and such matters are reflected by the fact that the GT costs around three times as much as the 6801. Of course, if one is taken by the look of the Breitling 1806 or AVIATION 6801, but one requires a modern piece, the current Breitling Chrono-matic 49, and recently discontinued 44mm offering, will do the trick. But for my money, neither of those watches matches the GT. 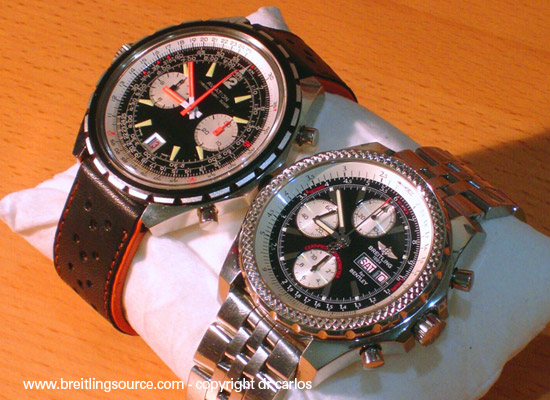 Given the bigger lugs on the GT, it’s increased thickness, and mass of the bracelet, these two watches have a similar overall presence.

According to Albert Wajs, only around 200 6801s have been, and ever will be, produced. With the bright orange hands and more pronounced luminescent indexes than the Breitling 1806, the 6801 mixes the look of the latter with the old Chrono-matic Superoceans and Cosmonautes. Whilst currently to be found for 60-70% of the price of a mint Breitling 1806, it’s entirely possible that mint AVIATION 6081s will approach the value of Breitlings in equivalent condition in the coming years.

To my mind, the appropriate way to treat vintage watches is akin to classic cars – one has to factor in regular maintenance to ensure faultless operation. And a prudent enthusiast doesn’t buy them to do the regular daily commute.

I have printed a comprehensive Heuer Technical Manual on the Buren Calibre 11/12 movement which I obtained from the Chuck Maddox site. I’ve already received advice on the tight time setting function from members of Breitlingsource. With a bit of guidance and a few dollars, most competent watchmakers should be able to keep the 6801 running for many years to come. But common sense indicates this will require more intervention than the GT.

Overall? Two relatively uncommon watches, one particularly so, which are both a joy to own and wear. If I had to choose one, it would be the GT. This is unsurprising given the price difference, along with a whole host of other reasons. However, there are times when the 6081 is definitely the one to go for.

In summer, in a Grateful Dead shirt, driving down to the little yacht moored in the afternoon sun to meet up with a blond sweetie for a few beers and whatever…well, the 6081 is talismanic. It’s that good. Given its history, in a way that cannot be said of the GT, the AVIATION 6801 represents much more than a fancy looking time piece.