The Mechanical Watch by Roffensian

This is a very simplified summary of the topic. It is designed to provide an overview of the subject for those who are interested, but will fall far short of a comprehensive discussion. I hope that readers will have a better understanding of the fundamentals, but they should not expect to receive a detailed description of all elements.

After my mindless rantings on tourbillons I got asked to offer some stuff on perpetuals, on minute repeaters, etc, but I also got a couple of PMs asking questions on how a watch movement actually works. So before I go off on various tangents on some of the more esoteric watch movements, let’s start with a simple mechanical watch.

The basics of all movements are essentially the same, regardless of how many bits are bolted on and regardless of whether it’s manual or automatic. It’s also little changed for most of a century – although some of the materials and processes are markedly different as has been discussed a few times in the last month or so.

Before we start let’s talk briefly about energy (the physicists can roll their eyes at the next bit). Essentially energy cannot be created; it can only be transformed so a watch is powered by the energy that is transferred to it by the winding of the crown or the rotation of the rotor. However, a watch needs to use this energy over a period of time, so it needs to store the energy – and that’s where springs come in.

The heart of a mechanical watch is the main spring. This is a thin piece of metal, usually at least 14 inches long, and sometimes a lot more, curled into a spiral. As the watch is wound the tension in the mainspring is increased and the spiral get’s tighter. As the watch runs so the tension is released, the energy is transferred into the movement and the spiral loosens.

So far this is all very simple, however, if this is all that happened we wouldn’t have a watch – there is nothing here to control the way that the energy is transferred from the main spring. For that we need an escapement.

Most modern watches use something called a double roller anchor escapement which works something like this....

A pallet fork (also known as a pallet lever or escape lever) prevents the escape wheel from rotating freely – the two ends of the fork interfere with the rotation of the wheel, thus stopping it. Heck – that makes no sense, here, look at this: 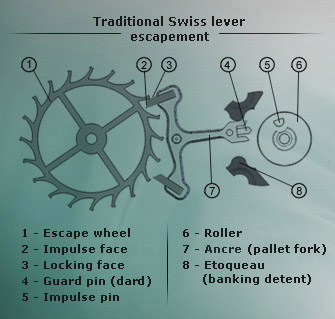 Don’t worry about all the fancy words that Patek Philippe use there – the pallet fork is the T shaped thing in the middle and you can see that there are two jewelled bits sticking out to interfere with the escape wheel.

The other end of the pallet fork has a small notch which engages with another jewel, called the impulse pin. This impulse pin is attached (logically) to the impulse roller, but offset from the centre. The impulse roller is attached to the balance wheel through a central pivot. There are other pieces, but if you can get your head around that then you are well on your way to understanding the escapement.

So what drives all of this pallet rocking? Enter the balance spring or hairspring. The balance wheel that I referred to earlier is weighted and therefore has a tendency to rotate – kinda like the rotor on an automatic movement. This rotation causes one end of the pallet fork to disengage and the other end to engage. The balance spring then provides the energy to reverse the direction of that swing and keep the pallet fork constantly rocking. When a watch is regulated, it is the tension of this spring that is adjusted to either speed up or slow down the rate of swing – the tighter the spring the faster the rate of oscillation.

And that’s pretty much it – that’s how a mechanical watch works, although I have eliminated some of the pieces - especially on the escapement. What I have focused on is the key moving parts, understand that there are a lot of other parts that help to control the forces at work and keep everything correctly alogned.

Also, one little footnote on jewels. These days the jewels in a watch movement are artificial – they are still referred to as rubies, but if they weren’t red then you would call the material sapphire crystal (yes, the same sapphire crystal that protects the watch dial). The function of the jewels is simply to act as bearings – they minimise friction and thereby increase the efficiency of the movement.