How To Spot Fake And Replica Casebacks

In the past, one of the most improperly reproduced things on replicas was the caseback. This is still the case to some degree, though better fakes exist with almost indistinguishable casebacks.

Today we will look at the less perfect copies, as the real ones are nearly indistinguishable save for slightly finer etching of the words in some cases. Even the serial numbers are random on some replicas!

Below are two casebacks of the Breitling B-1 quartz watch. This (and its successor the Airwolf) is the ONLY watch in the entire Breitling line that has this engine-turbine back, and as you can see, this fake is very poorly reproduced. 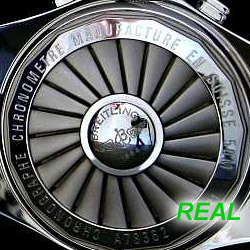 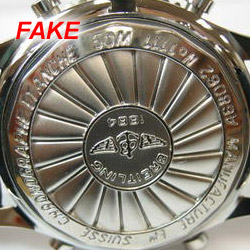 Not only is the fake above poorly reproduced, but if you could see the front, you'd see that its definately NOT a B-1, and infact is some sort of amalgamation of several different types of watches - not just Breitling.

The Fake B-1 copy casebacks do not have the actual vents in the engine turbine like the real one does, and from the picture you can see the difference in fit and finish.

Next here we have a fake caseback that is representative of what a standard Breitling looks like, and one of many fake variations. As you can see, the back is not rounded, and the markings are not very deep - evidence that the back is stamped very poorly. The real dial on the left shows the superior workmanship of a properly casted and engraved caseback. 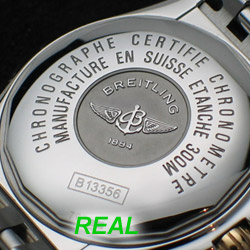 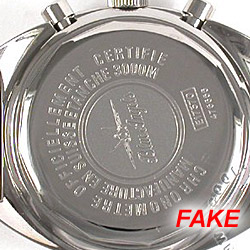 Note: Some earlier casebacks were indeed flat, such as the ones on the Astromat.

And finally, below we have a fake and real Super Avenger caseback. The caseback on the right obviously lacks the finesse and execution of the genuine Super Avenger caseback on the left. Also note the flat and poorly designed area surrounding the caseback. There are some obvious mistakes, and spending some time with the genuine article can really help you spot the clones. You will also find that the majority of the fakes out there have the incorrect caseback for the model. 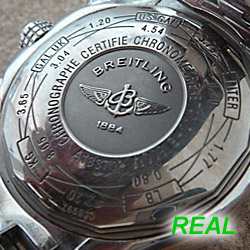 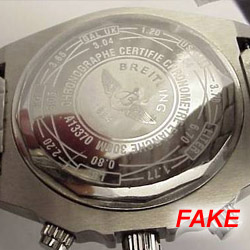 Keep in mind... There are higher quality replica casebacks out there, but those would require a person familiar with Breitlings to spot, buyer the buyer, not the watch. Good luck, and don't get duped!